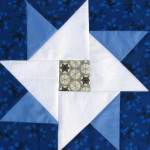 Sometimes good can come out of a horrible event. That’s what has occurred as a result of the brutal killings of three lovely, innocent teens in Israel. The Jewish population was galvanized to find the boys and once the truth was known — that they had been senselessly murdered — the country mourned together. As a result of their deaths, Israel retaliated, only to discover the dangers in Gaza that awaited us. I never think things happen just by chance. END_OF_DOCUMENT_TOKEN_TO_BE_REPLACED 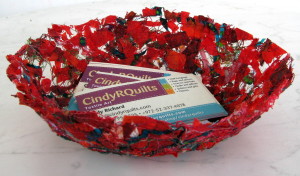 Well, it’s time for the fair. I am in frenzy mode. Working… Creating… Not sleeping… The house is a mess and I haven’t done any of the other tasks one should do when running a business EXCEPT making new stuff for the fair. It will be at our synagogue, Etz Chaim in Beit Shemesh on Thursday, 27 Feb. from 5-9 pm. I have been racking my brain to come up with some new artful, yet functional items. I think I have done it. You will tell me, I am sure. So, please come see me at the event.

There will be a bake sale in addition and something else they call a “White Elephant”. You know the adage, someone’s stuff is someone else’s treasure… That’s the Elephant part of the event.

I look forward to seeing you there. Come find something special for your self or the perfect gift and support exceptional, colorful, handmade art and craft at my table. Thanks! 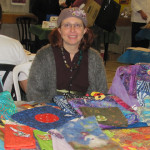 Last week the main environment program in the Beit Shemesh / Jerusalem region was held for the general public. It was run by Renee Halpert from Forum Shemesh Yehuda. About 400 residents participated in the event. The adults and children alike enjoyed the varied booths selling quality, ecological products.
The goal of the event helps to raise the level of environmental awareness and presents ideas for leading a more sustainable lifestyle.
I had a table where I sold handmade quilted & felt needlepoint art & accessories made from all-natural ingredients. Here were some other vendors.

In addition to the definite value of the event, everyone had a good time. It was inspiring to take part in this important cause. Click here to see more photos of the event taken by Renee Halpert.

Last night we had a lovely, creative needle felting event at our local synagogue in Beit Shemesh. Fifteen women attended and left at the end of the evening with beautifully crafted needle felted art. I taught the craft and supplied the materials. The foam upon which the women worked came from a mattress my son cut up for me… My husband graciously hammered the needles into corks so they could be held easily. I bought the materials at a local shop in Nes Ziona. It all took some orchestrating, but it worked out very well. My friend Eileen organized the event on behalf of the synagogue. Thanks, Eileen!

As you can see from the photos some women followed photos they brought with them. Some worked from their imagination. The result was that they enjoyed, relaxed and had a very nice time.

Eileen sent out a mail at the end… “A great big thank you to Cindy Richard for teaching a wonderful class on needle felting. The women’s evening last night was fun filled and relaxing. Cindy taught us the craft of needle felting which was enjoyed by all the attendees. At the end of the evening we each took home our own beautifully handcrafted picture. Thank you to Cindy and all the women that attended!” 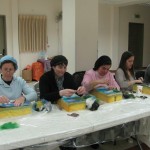 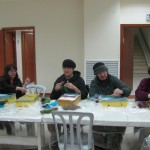 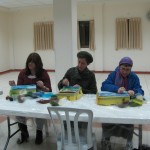 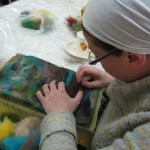 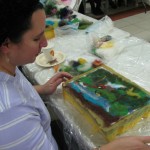 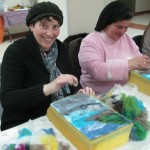 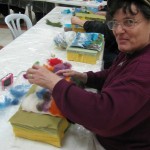 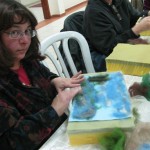 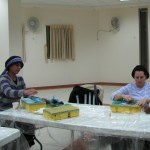 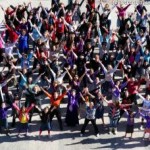 I realize this is a bit off topic, but I thought you might give me a bit of latitude. On Friday, Jan 6th, 2012, a group of 250 women from Bet Shemesh decided to raise their voices in full force against the exclusion of women from the public domain by holding a mass public dance in the city square. The women, residents of the city from all ages and sectors, religious, traditional and secular, gathered together in a flashmob dance, in the city square and started dancing towards a change.
Danielle (16) and I participated and it was an amazing boost. I havn’t felt so “part of something larger” in a long time! It was great energy, a lot of fun.

Just to fill you in, lately there has been a lot of negative news coming out of Beit Shemesh. An extreme faction of religious orthodox men in the city have been demonstratively belligerent to the modern orthodox community. The flashmob was an expression of women in our city. It was meant to show the world there is more to Beit Shemesh than has been in the news lately.

Thanks to Miri Shalem and Brenda Ganot for your hard work to make this happen.
Enjoy! 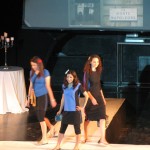 On Dec 7th there was a fashion show held as a fundraiser for a local children’s services organization in our area of the world. Fashions of all sorts and colors were shown and modeled by volunteers who banded together to help raise money for this group, which assists kids with learning disabilities. So many people have used these services; so many kids have benefited from them. Even my kids went there.
I had a table at the event filled with all my new work — lots of bags and belts and scarves. Danielle, my daughter, came to help me out. Here are some photos… Thanks Danielle! 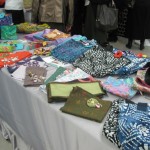 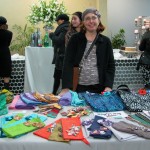 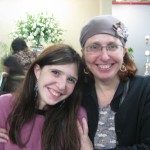 Want to come to a fashion show and help learning disabled kids too? 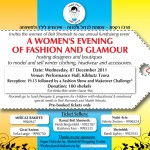 Ladies, come on out and show your support for all the designers! I will have a table and my accessories, such as quilted bags and silk scarves, will be modeled on the runway!! 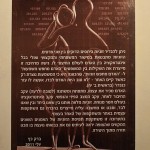 The opening of a unique art exhibit featuring the theme “Couples” took place a week ago, Thursday night. The exhibit is housed in the art gallery on Moshav Givat Yishayahu, home to quite a few artists in the HaElla area.
The theme was presented in paint, photo, steel, chicken wire and wood. Attendees wandered around the art exhibit with a glass of wine and high spirit. One of the renowned artists featured was Moshe Katz, blacksmith. Katz has been exhibited widely internationally. 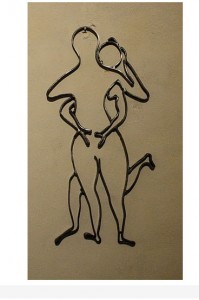 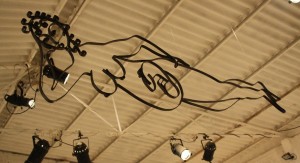 Katz’s sculptures are available for purchase on Etsy: http://www.etsy.com/shop/KatzStudio

The art portion of the event was followed by a lively concert nearby. The HaElla Artists are a cooperative that run events such as this one several times a year. They also host visitors in their homes at open house weekends before Sukkot and Pesach.

Here are some photos from the evening taken by Vered Terry https://picasaweb.google.com/veredterry/6?authkey=Gv1sRgCInXyqTxx-C8rwE.

A very nice YouTube  video has just been released about quilting in Israel for the Ministry of Tourism. It’s an inspiring piece and I would like to share it with you all.
Eventually quilting in Israel will take on a middle-eastern taste although the roots of quilting are not from this region. It’s fascinating to watch this evolution.

Professional networking splash: Today I presented my quilting to the group 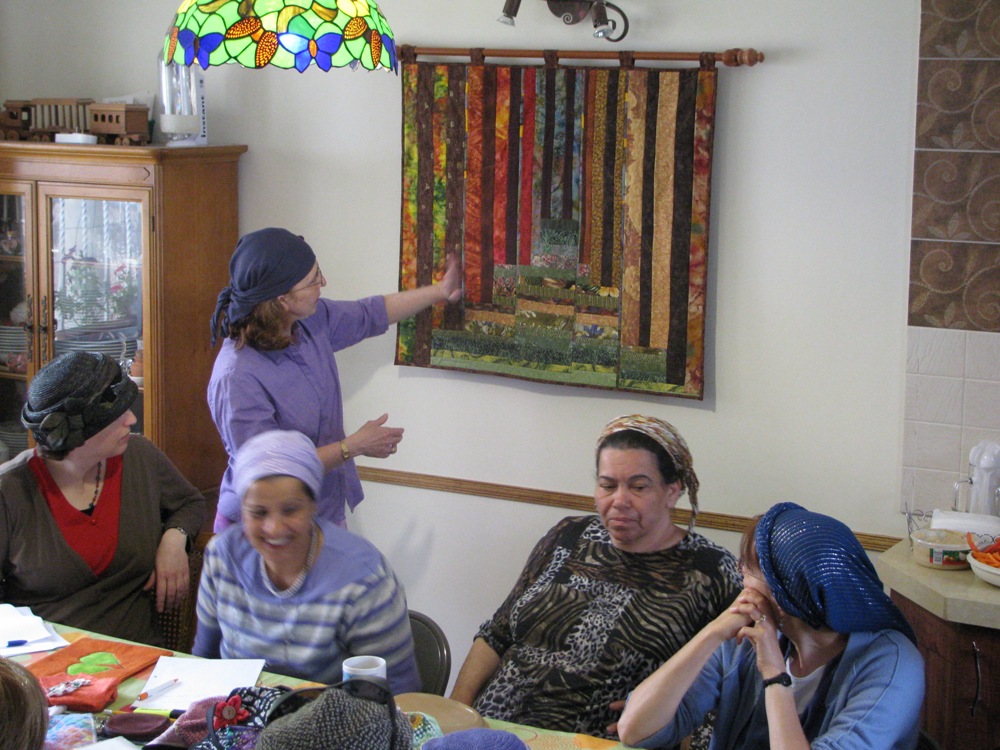 Today I hosted our local professional networking group. It was my turn to put myself on stage and explain: What I do, Why I love it, and What is special about my product.  END_OF_DOCUMENT_TOKEN_TO_BE_REPLACED