Practice can be a spiritual inspiration: A lesson in quilting feathers

There is a saying, “From your students you will be taught…” Here is a story about a good friend of mine, Riki, to whom I teach quilting. Riki has a special quality. She believes in the value of practice. She told me that she once learned with a music teacher as a girl who used to say:

“…Every song you sing should show some evolution from one to the next. Everyday practice is an occasion to evolve. When we practice, though it doesn’t seem like much, it is actually a spiritual event and should be treated as such…”
Riki keeps these words in mind as she works on any project.

Riki decided to master free motion quilting — specifically quilting Feathers. Riki purchased a book about mastering feathers called Feather Adventures by Patsy Thompson. After purchasing the book, Riki sketched her design and practiced it with a pencil. Next she made practice sandwiches and hit the sewing machine. Hour after hour Riki persevered, paying attention to the shape of her loops and the overall composition. Week after week, Riki painstakingly repeated this exercise until she was happy with the results. Happy is not just satisfied… Finally, before touching the real quilt, Riki did a practice run with the thread she intended to use. She didn’t like the look and actually went with another thread. After this “dress rehearsal” as she called it, Riki tackled the real quilt.

I won’t go into too much detail here because my message today is about the value of practice. It turned out the thread Riki chose was faulty and it was very difficult to sew with. Because Riki now had the confidence to do the job well, she finished it up with another thread rather than throwing up her hands in defeat.

I thought I would show you some of the practice pieces that Riki created in this process. It really was a wonderful experience watching the mastering of this skill. I learned a lot from Riki through this process. From this student, I was taught… Thanks, Riki! 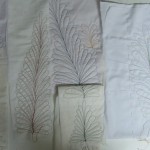 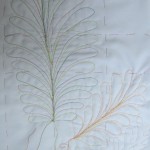 Why is quilting important to me?

What do stained glass and quilting have in common?